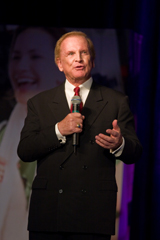 Dr. Denis Waitley has inspired, informed, challenged and entertained audiences for over 25 years from the boardrooms of multi-national corporations to the locker rooms of world-class athletes and in the meeting rooms of thousands of conventioneers throughout the world. Recently, he was voted business speaker of the year by the Sales and Marketing Executives’ Association and by Toastmasters’ International and inducted into the International Speakers’ Hall of Fame.

With over 10 million audio programs sold in 14 languages, Denis Waitley is one of the most listened-to voices on personal and career success. He is the author of 16 non-fiction books, including several international best sellers, “Seeds of Greatness,” “Being the Best,” “The Winner’s Edge,” “The Joy of Working,” and “Empires of the Mind.”

His audio album, “The Psychology of Winning” is the all-time best selling program on self-mastery.

Denis Waitley has studied and counseled winners in every field from Apollo astronauts to Super Bowl champions, from sales achievers to government leaders and youth groups. During the 1980’s, he served as Chairman of Psychology on the U. S. Olympic Committee’s Sports Medicine Council, responsible for performance enhancement of all U. S. Olympic athletes.

As president of the International Society for Advanced Education, inspired by Dr. Jonas Salk, he counseled returning POWs from Viet Nam and conducted simulation and stress management seminars for Apollo astronauts.

A graduate of the U. S. Naval Academy at Annapolis, and former Navy pilot, he holds a doctorate degree in human behavior.